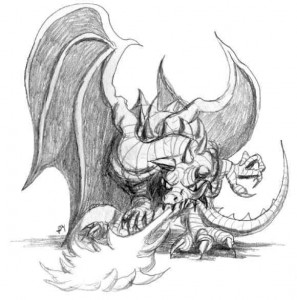 The king unto his troubadour
Said, "Come, a ditty while we sup:
Some sample of your ancient lore
To lift the weary spirits up.
Some tale of hero true and brave
Who faced the dragon's fire alone
A damsel or a town to save
And got for his reward a throne.
A lay of beauty and of dread,
Of starlit sky and distant shore,
A ballad of enchantment," said
The king unto his troubadour.

The minstrel took his lyre up,
His fingers poised upon the strings;
And motionless stood knife and cup
To watch the melody take wings.
So silence reigned throughout the hall,
And then the troubadour began
With notes like drops of rain that fall
Upon a parched and burning land.
First soft, then like a torrent down
It flowed, and swept them away,
Beyond the walls, beyond the town
Beneath the waning light of day.
They heard the western sky turn red,
Then fade away to black. They heard
The stars glint silver overhead
Until the morning breezes stirred
A land where they had never been.
A lull came, and they drained the cup.
'Twas e're such like enchantment when
The minstrel took his lyre up.

He stood; the words began to flow.
With them the sun rose bright and clear,
And then the knights beheld the foe--
And hand was clenched on hilt for fear.
They saw the green and glittering scales;
They heard the rumbling of his blaze;
They felt their hearts begin to quail
Beneath the venom in his gaze.
They felt the dragon's baleful breath,
Surveyed the worm's appalling length,
And knew why men could long for death
Rather than assay his strength.
They saw the ruined countryside,
They saw smoke rising in the sky,
They saw the serpent's ramping stride,
And then the worm began to fly.
Then darkness came upon them all;
They flung them down to wait for woe,
Save one bold warrior, strong and tall,
Who stood; his words began to flow.

"Come Death, Destruction, Flame, and Fire,
Come Malice, Madness, evil Spell,
Come Darkness, Doom, or Dragon's Ire,
I still defy thee, Fiend of Hell!"
He took the flame upon his shield;
It melted fast onto his hand.
The sword his other arm did wield
Became a beaming fire-brand.
What no mere mortal blade could do,
Heat from the worm's own evil heart
With one sword wielded fierce and true
Did: tore the gleaming scales apart.
The blood spurt scalding from his side;
The dragon roared and rose in pain;
A hundred tons of ravaged pride
Fell in a ruinating rain
Upon one still undaunted knight
Who scorned to raise his useless shield,
But lifted up with all his might
The sword, and thus his fate was sealed.
Down came the worm; the knight went down,
But drove his point into its heart.
Then came a blast and dinning sound
To split the very sky apart.
A searing blaze leapt in the air;
The worm was his own funeral pyre.
But also on that warrior fair
Came death, destruction, flame, and fire.

The tear flowed freely down the cheek
Of comrades in that bitter glade;
They cursed their hearts, too slow, too weak
To stand and give their brother aid.
But then the flames began to part,
And, striding forth, the hero came:
For those who pierce the dragon's heart
Become impervious to flame!
Then down as one upon the knee
They fell, and took him as their king.
He swore them there to fealty
Upon his sword, still glistening.
So courage rose within each heart,
And with their oaths they gave it breath:
Ne'er more from duty to depart
Come fire, flame, destruction, death.
"They kept those vows in many deeds,
But those come in another tale;
And now, my brothers, we must needs
Drink our lord's health in frothy ale."
Thus ended the good balladeer,
And none could find a word to speak:
The last note faded in the ear,
The tear flowed freely down the cheek.

The king then to his troubadour
Said, "Come, a ditty while we sup:
Some sample of your ancient lore
To lift the weary spirits up.
Some tale of hero true and brave
Who faced the dragon's fire alone
A damsel or a town to save,
And got for his reward a throne.
A lay of beauty and of dread,
Of starlit sky and distant shore,
A ballad of enchantment," said
The king unto his troubadour.


"The Balladeer" originally appeared in the 2003 issue of The Mythic Circle, but the last twenty lines were omitted there. We want our readers to have the entire poem with an illustration. Our apologies to the poet, Dr. Don Williams.


Editor: Gwenyth E. Hood
Copyright © 2003 by The Mythopoeic Society; all rights revert to authors and illustrators.