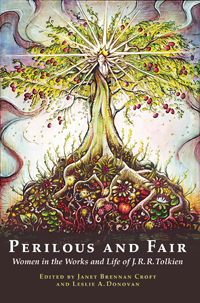 Women in the Works and Life of J. R. R. Tolkien

Since the earliest scholarship on The Lord of the Rings and The Silmarillion, critics have discussed how the works of J. R. R. Tolkien seem either to ignore women or to place them on unattainable pedestals. To remedy such claims that Tolkien’s fiction has nothing useful or modern to say about women, Perilous and Fair focuses attention on views that interpret women in Tolkien’s works and life as enacting essential, rather than merely supportive roles. Perilous and Fair includes seven classic articles as well as seven new examinations of women in Tolkien’s works and life. These fourteen articles bring together perspectives not only on Tolkien’s most commonly discussed female characters – Éowyn, Galadriel, and Lúthien – but also on less studied figures such as Nienna, Yavanna, Shelob, and Arwen. Among others, the collection features such diverse critical approaches and methods as literary source study, historical context, feminist theory, biographical investigation, close-reading textual analysis, Jungian archetypes, and fanfiction reader-response.


Romuald I. Lakowski, “The Fall and Repentance of Galadriel”
Cami D. Agan, “Lúthien Tinúviel and Bodily Desire in the Lay of Leithian”
Kristine Larsen, “The Power of Pity and Tears: The Evolution of Nienna in the Legendarium”
Melissa A. Smith, “At Home and Abroad: Éowyn’s Two-fold Figuring as War Bride in The Lord of the Rings”


Leslie A. Donovan, “The Valkyrie Reflex in J. R. R. Tolkien’s The Lord of the Rings: Galadriel, Shelob, Éowyn, and Arwen”
Phoebe C. Linton, “Speech and Silence in The Lord of the Rings: Medieval Romance and the Transitions of Éowyn”
Maureen Thum, “Hidden in Plain View: Strategizing Unconventionality in Shakespeare’s and Tolkien’s Portraits of Women”


Una McCormack, “Finding Ourselves in the (Un)Mapped Lands: Women’s Reparative Readings of The Lord of the Rings”

Perilous and Fair
Women in the Works and Life of J. R. R. Tolkien

Edited by Janet Brennan Croft and Leslie Donovan
Published in June, 2015; available both in print and electronic formats

Other electronic versions (from Smashwords) $9.99