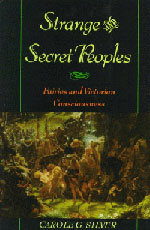 If recent nominees for the Mythopoeic Scholarship Award are any guide, Faërie and its denizens continue to fascinate scholars as well as readers and writers of fiction. Most nominees dealing with fairies have been interested in the fairy tale from various perspectives (literary, psychological, sociopolitical, historical) and sometimes its relationship to fantasy fiction. Even more recently — especially in Jane Martineau’s Victorian Fairy Painting (1997) — scholars have focused on the fascination fairies seemed to exert on Victorian consciousness, particularly in the British Isles. Sometimes crossing the line into obsession, this fascination permeated the visual and performing arts as well as literature.

Silver broadens this view to include not just the arts, but the whole range of Victorian interests. Her work is a cultural study that includes folklore, religion, natural sciences, and the emerging social sciences, particularly anthropology. How Victorian fairy belief was influenced by nineteenth-century intellectual ferment, and influenced it in turn, tells us a great deal more about the Victorians than it does about the fairies. As Silver points out, “[l]ooking at the way the Victorians looked at fairies provides an insight into the underlying values of a society.”

This is a large topic to cover, and in less skilled hands could have easily gotten out of control. In her introduction, Silver nicely spells out her primary focus (folklore and adult literature rather than children’s literature and fairy tales) and the organization of subsequent chapters. She then locates the origins of the fairy craze in English Romanticism, particularly the interest that led its adherents to collect and expound upon so many primary sources. Much of Sir Walter Scott’s lesser-known fiction, for example, included significant fairy content, and Silver argues that the use of such by a popular author made these creatures “palatable to a large, middle-class audience.” Lastly, she introduces the factor that constitutes her most original contribution to the study of fairy fascination-the role played by science. Anthropology, ethnology, and archaeology had a significant impact, but one can easily see how these fields might overlap with folklore. More surprising, but convincing, is her argument that the natural sciences — particularly in the aftermath of Darwinism — were at least as important.

The first chapter deals with theories from various perspectives on the origin and nature of fairies. Silver places these theories in two categories — those that saw fairies as Spirit, and those that categorized them as Matter. In the first camp were the religious explanations, and belief was not limited to Spiritualists, Theosophists, Rosicrucians, and similar groups of a less traditional sort. Christians of more than one denomination also believed in fairies as a separate creation, citing the authority of John 10:16. Scientific explanations ranged from those of the mythological-linguistic “school” linked with Max Müller (and with the infamous “myth as a disease of language” remark that inspired a Tolkienian comeback); to a more anthropological view of fairy lore as a survival of beliefs common in more “primitive” phases of culture; and even to fairies as survival of actual earlier and not-quite-human inhabitants of the British Isles.

The basics thus established, Silver wisely deals with the remaining mass of material by selecting five significant themes in fairy lore and focusing a chapter on each. Chapter Two examines belief in changelings. This belief that led to incidents of physical abuse and even death (primarily of women and children) reported in newspapers as late as the 1890s. Although the changes observed in those believed to be fairy replacements were likely to be simply the symptoms of various mental or physical illnesses (and a few contemporaries suggested as much) the most popular explanations were euhemeristic (primitive races improving their breed); occult (possession); or Darwinian (throwback). This preoccupation with child abduction throws an interesting light on the psychology of the time, and the tendency to blame changes in one’s loved ones on an “Other” illuminates the roots of racism and xenophobia that influenced Victorian intellectual life and scientific inquiry. The chapter on “Little Goblin Men” expands upon the way folklore fed racial prejudice. Real dwarfs, folklore goblins and gnomes, and “pygmy” peoples recently discovered in Africa became conflated. The dwarf, “remythified and racialized,” became increasingly associated with evil, a debased and animalistic creature.

Victorians certainly “had issues” about women as well. These are highlighted in a chapter on fairy brides, and another dealing with fairy cruelty, especially on the part of female fairies. Silver notes the interesting coincidence that the height of interest in the fairy bride (be she swan maiden, selkie, or undine) coincided with political events of the 1880s and 1890s when women’s issues were much discussed-such as rights to own property and leave abusers. The casual cruelty and amorality of fairies, especially as depicted in painting and literature, is related to a number of contemporary anxieties. Faerie and its denizens came to represent all manner of fears — the mob, mental illness, death, anarchy, social disruption, female power and female dependence. All manner of things that threatened the rigid structure of Victorian society seems to have been personified at one time or another in the fairy folk.

The last chapter, fittingly, is “Farewell to the Fairies.” Silver quotes and supports Peter Narváez’s contention in The Good People (1991) that “the very idea of the fairies’ departure and of the fading of the fairy faith may be seen as an integral part of the fairy lore complex … always leaving but never gone.” One can easily see how this theme reappears in the literary fairy lore of our own day, from Tinkerbelle to Tolkien. Folklore is full of accounts of people who claimed to have witnessed the fairies’ departure as far back as 1790, usually as a result of urbanization and the shrinking of the wild places where they dwelt. Silver argues that the fairy faith in the British Isles diminished due to many factors, including the bowdlerization of fairy stories as they became moralizing literature for children, and the Cottingly fairy photographs hoax.

She also makes clear that the “never gone” part is equally true. Some kind of fairy faith fills many needs, from an alternative religious view to “an oblique form of social protest” among Celtic nationalists. Many elements of the fairy faith are still with us, she points out, except the little goblin men have been turned into little green men, and people are abducted to UFOs rather than the hollow hills.

Well supplied with enough notes, cited works, and indexing to satisfy the scholar, this year’s MSA winner is nonetheless lucidly written and accessible to the general reader. Silver unearths all manner of interesting examples of folklore, fiction, and supposed fact to illustrate aspects of this particular Victorian fascination. Her discussion of the feedback loop between folklore and the emerging sciences of the nineteenth century is particularly intriguing, and adds an element seldom covered in other analyses of fairy lore and belief. The breadth of her interests, and the variety of her evidence, help explain why the realm of Faerie maintains such a hold on us and on the writers of fiction we most like to read.