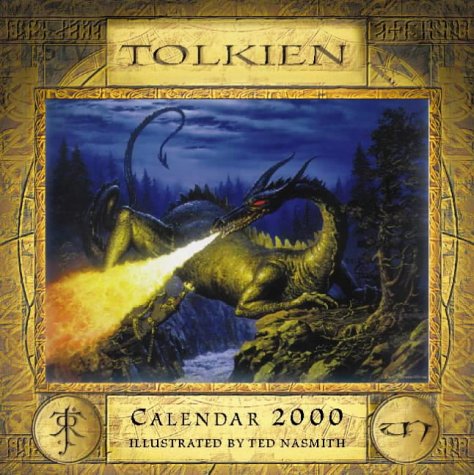 The trend of J.R.R. Tolkien’s publishers to recycle artwork from existing sources has previously produced some calendars that have appeared tired, even when freshly removed from their cellophane wrappers. But despite the fact that half of the paintings in the new 2000 Tolkien Calendar have been previously published, there is nothing stale about this year’s edition. All of the finished paintings by artist Ted Nasmith are enlivened by the addition of their preliminary color sketches at the bottom of each month’s page. This rare and welcome glimpse into the artist’s creative process allows a look at how a scene is initially approached, tried out for impact, and then refined into the finished product.

The paintings for February (“Finduilas is Led Past Túrin at the Sack of Nargothrond”), April (“Beren and Lúthien are Flown to Safety”), May (“Maglor Casts a Silmaril”), July (“Ulmo Appears Before Tuor”), August (“At Lake Cuiviénen”) and September (“Illuin, Lamp of the Valar”) have already appeared in the twentieth anniversary edition of The Silmarillion, illustrated by Nasmith. The accompanying color sketches for these half-dozen paintings range from less pronounced compositional and color variations (July, August and September) to more radical changes in format (February’s switch from the horizontal to the vertical), in perspective (April’s repositioning of the observer’s eye-in-the-sky among the Eagles), and in kinetic energy (May’s Maglor progressing from a static “wind-up” to the actual “pitch” of a Silmaril into the Sea).

Nasmith’s insistence that this calendar contain new art among the old guarantees that it will become a collector’s item, and not simply a retread. January’s “Beleg is Slain” is one of two new paintings exhibiting the greatest change from sketch to final draft. In this scene, Túrin, in a flash of lightning, stares aghast upon Beleg, the friend he has mistakenly killed. In the sketch version, Beleg lies in relative repose against a tree trunk. Gwindor, who kneels beside Beleg, gestures forcefully toward Túrin as if to hold him at bay. In the finished painting, however, Nasmith changes the composition to take full advantage of the drama of the moment. Gone is the pointing gesture of Gwindor’s arms. Now his hands and arms are upraised in dismay. This change of position, set against the eerie flare of lightning, breaks boldly into the negative space of the scene. In this version, Beleg, his head thrown back, writhes in agony at Túrin’s feet. Here the scene’s powerful tension sustains across the board, whereas in the preliminary sketch it progresses quickly from horror to a sober calm as the viewer’s eye moves from the slayer to the slain.

In some of the new paintings there is a give and take of pros and cons between the sketch and finished piece. March’s “Tuor, Gelmir and Arminas” has, in the color sketch, a better spatial relationship between the characters and the curving cave walls. But in the finished painting, the scene gains a more breathtaking surge in the frothing waters of the subterranean river. Likewise, December’s sketch version of “The Slaying of Glaurung” benefits from the viewer’s ability to look up from a dread-inducing lower angle at the death throes of the fire-spewing dragon. In the final painting, the point of view is raised to a more neutral position. Still, this less dynamic view of the dragon allows the observer to better see the moment of Túrin’s revenge as he drives home his sword into Glaurung’s belly. It also allows a glimpse of the chasm below, the scope of which no other Tolkien calendar artist has managed to adequately capture, until now.

Four other new paintings grace this year’s monthly pages. June’s “Fingon and Gothmog” depicts, amid the smoke and reek of battle, the Balrog armed with ax and whip, bursting with flame as he bends his baleful glare upon the valiant Elven king. October’s “The Incoming Sea at the Rainbow Cleft” could be a page out of a Middle-earth tourist’s guidebook, so splendid is the scene. Nasmith paints the translucent green of towering, breaking waves as well as any modern master of the seascape. In November’s “Lúthien Escapes the Treehouse,” Nasmith alters the house from sketch to finished painting to make it look less like a cottage. It is still, after its transformation, a house fit for an Elven princess. But its simplified design reveals it more for what it is: a prison — a beautiful one, but a prison nonetheless.

As a bonus this year, Nasmith treats us to a dazzling centerfold entitled “Eärendil Searches Tirion.” With an expert eye toward detail, he captures Tirion on Túna in all of its otherworldly splendor. The elegant architecture merges fantasy with Classical and Middle Eastern influences. The end result is a shining, glorious city worthy of the Eldar of the Blessed Realm. This grand painting, and the rest of the paintings in the 2000 Tolkien Calendar — new and old, sketch and final draft — are rare delights not to be missed. Highly recommended.