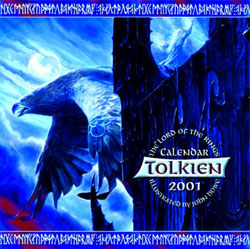 John Howe, along with fellow Tolkien illustration alumnus Alan Lee, has been tapped as a conceptual artist for the upcoming live-action film version of The Lord of the Rings, and this makes him a logical choice for illustrator of this year’s calendar. Howe is no stranger to Tolkien calendars, having contributed much artwork to a half dozen editions over the years.

In this edition, Howe, for the most part, sticks to the sort of subjects with which he is comfortable: Nazgûl, Shelob, the Balrog, Gandalf. It is likely that much of this calendar is taken directly from the pre-production artwork Howe has produced for the upcoming films.

In June’s painting, Howe offers an impressive Argonath. These towering royal behemoths flanking the narrow Anduin gorge elicit the appropriate awe from their sheer scale, and this is further punctuated by the tiny Elven ships afloat in the stream below. The kings do lack, however, the solidity one would expect from carven stone. They seem rather ghosts from the distant past — which, in itself, is strangely evocative. But in their ghostliness they do not achieve a sense of solid rock. The technique used to render them better suits the description of the phantom Oathbreakers whom Aragorn summons to the Stone of Erech. Howe would do well to try his hand at that particular scene, employing the technique he used here.

January’s The Black Riders in the Shire shows three Nazgûl lurking around what appears to be Bagshot Row. On the borders of this layout one sees Nazgûl madly galloping their horses through the night. The funky liripipes floating at the back of the Nazgûls’ hoods make them vaguely Ninja-like. Yet the painting merely makes the viewer somewhat uneasy. It lacks the true powerhouse tension to produce pure, unmitigated dread. March’s Horseman in the Night depicts Gimli’s Council of Elrond tale of a deal-making Nazgûl’s arrival at Dáin’s court. Of chief interest here is the unique roller coaster-like bridge across which the Nazgûl urges his horse. The painting is atmospheric, but again the subject matter is only mildly threatening, and lacks sufficient tension.

The Fear Factor is successfully achieved, however, in the center spread The Siege of Minas Tirith. Here the skies are awhirl with winged Nazgûl as the assault upon the Tower of Guard rages on. Howe rightly captures the epic scale of the furious battle, and expertly contrasts the angry reds of Sauron’s wrathful slaves and war machines with the fair and desperate whites and blues of Gondor’s last, best hope. In the foreground, the fearsome battering ram Grond is hauled relentlessly onward, while bellowing Mûmaks terrorize the field. Howe is less successful in capturing Minas Tirith itself, mostly because Ted Nasmith’s previous renditions of the city are so perfect that every other artist’s depiction pales in comparison. Still, it is a treat to see a center spread, something that does not always appear in the Tolkien calendar.

For 2001, Howe gives us a virtual Balrog-and-Gandalf-a-go-go. A full three illustrations deal with Gandalf’s battle (July’s The Bridge of Khazad-dûm), his plunge (February’s Gandalf Falls with the Balrog), and his continuing set-to with Durin’s Bane (November’s Zirak-zigal). All three paintings have their respective artistic merits — unless the viewer is particularly adverse to winged Balrogs. Each possesses the dynamism which two of the three Nazgûl paintings lack. But the inclusion in a single calendar of three images so closely related to one another is overkill. The answer as to why this occurred may be that Howe, short on finished new artwork, had to delve into his stockpile of illustrations to provide sufficient work to fill out the needs of the calendar. It is to be noted that two of the three Balrog pieces (February and July) are dated 1996.

Gwaihir the Windlord makes two appearances, first in May’s Escape from Orthanc, where the great Eagle glides past the indomitable black tower as Gandalf calls to him from its summit. This is a masterful painting in all its elements, especially in the artist’s handling of glinting cold moonlight on the facets of unbreakable black stone. Gwaihir also flies to the rescue of Frodo and Sam at Mt. Doom in October’s The End of the Third Age. But again, here is a scene that suffers in comparison to Someone Else’s Work: Michael Whelan’s far more poignant and harrowing painting of the same subject, The Eagles Are Coming in the 1980 calendar. Nor does Howe outdo Nasmith, who better captured “the great peril of the skies” around the spewing volcano in his 1990 version, At the Foot of Mt. Doom.

The trouble with Howe’s Gwaihir in both of his paintings is that the Eagle is just too darn big. If Gwaihir were of the size Howe paints him, he would never have complained about Gandalf’s weight being a burden, as the wizard recounts at the Council of Elrond. Whelan and Nasmith are much more true to the avian character in regard to the “size thing.”

The rest of the calendar is hit and miss. Howe misses with April’s Gollum Flees the Elves of Mirkwood due to a lackluster composition, but mostly because his Gollum is too Goblin-like in appearance. Howe doesn’t click with September’s Shelob about to Leap on Frodo, either. The composition is more than passable, placing the helpless Sam in the far background, and the fey Frodo running madly in the foreground, with Shelob unseen above him. It is Shelob herself that sinks this work. The monster is distinctly lacking in “body logic”, hardly seeming a creature that can move at all on its peculiar, unbending limbs, let alone leap after the fleeing hobbit.

Howe does better with December’s idyllic The Grey Havens, a two-part painting depicting in a split-screen effect the silent, forlorn beauty of the Havens in the top two thirds, and, in the lower third, Elven ships departing upon the Straight Road to Valinor. In terms of Tolkien’s characters, Howe best captures Elf and Dwarf in August’s Legolas and Gimli. The pair, in full battle gear, stare out pensively from the walls of Helm’s Deep. Gimli (for some reason shown without his axe) is appropriately grim (although more scar-faced than is necessary.) But it is Legolas who commands our attention. Howe gives him flowing golden hair and a resolute face — what one can see of it. Half of it is obscured by a handsome — if wildly impractical — warrior’s helmet. His mouth and chin are set with rugged determination, awaiting the assault of the orcs. Howe does well by Tolkien’s concept of the Eldar, endowing the Elf with the dignity, power and gravitas befitting his immortal status.

This is a sound addition to the Tolkien calendar collection, despite its sundry quirks. It may possibly be the last calendar featuring an artist’s depiction of Tolkien’s world for a while. The next year (or two, or three) may see calendars with photographic images from the upcoming live action films. Let’s hope HarperCollins resists the temptation to do this, and instead continues to give us artists’ views of Tolkien’s creation in pencil, pen and brush.