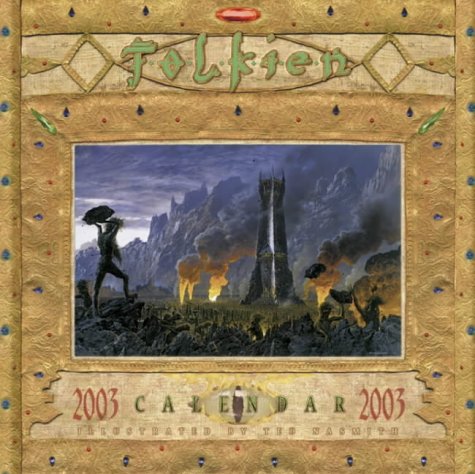 The 2003 Tolkien Calendar is Part Two of Ted Nasmith’s three-year illustrating odyssey through Middle-earth. The illustrations in this year’s edition depict events from Tolkien’s The Two Towers. The pictures range from the up-close-and-personal (the desperate, bloody battling in January’s Boromir’s Last Stand), to the eerie (June’s Apparitions — the noxious nightmare of the Dead Marshes), to the epic (the centerpiece poster of The Wrath of the Ents.) In the latter, Nasmith conjures up one of the best-designed, most intimidating Orthancs of recent illustrative memory.

Nasmith has long painted the forests of Middle-earth with more than their share of mystery and arboreal menace. Merry’s and Pippin’s tiny figures hike doggedly between gnarled, purple-brown sentinels of ancient, perilous trees in February’s Fangorn Forest. Panoramas are also a hallmark of the artist’s work, and this year they expand through such paintings as March’s The Riders of Rohan, where the mounted warriors of Théoden roar across grassy fields, with majestic, snow-covered mountains providing an imposing backdrop.

July’s First Sight of Ithilien offers both hazy, far-off horizons as well as a foreground of emerging springtime in the rich, if deserted, land that Tolkien described as “the garden of Gondor.” Other notable illustrations include September’s The Terrace at Henneth Annûn, where Faramir, Frodo and Sam gaze into the rocky depths as the Ranger Anborn draws a bead with bow and arrow on an unseen Gollum far below. Nasmith’s use of silver-blue light on falling water and hard stone gives the scene a chilly, dreaming shimmer.

November’s The Tower of the Moon contrasts the deadly red glare of a Mordor sky with the ghastly pale exhalations of the once-magnificent Minas Ithil. Nasmith disturbingly captures the essence of this citadel of horror, somehow managing to make it both attractive and loathsome. This is one of the best visualizations of something great and beautiful in Middle-earth that has been corrupted by Sauron to his own purposes.

Next year’s calendar will complete this impressive trilogy of Tolkien-inspired imagery. Nasmith continues to take full advantage of this rare publishing opportunity, and Tolkien fans, and the world of Tolkien illustration, are the richer for it.